Your Location
Select a Location

Copyright 2021 © Vedha Fish Farm
Due to the COVID 19 epidemic, orders may be processed with a slight delay

How to Catch Aquarium Fish With Net

How to Hatch Brine Shrimp Eggs

Betta fish will be prone to illnesses if the water quality is compromised. Common betta diseases include:

An overfed betta is prone to get constipated. Dried foods can also trigger constipation because they are not easily digested. The affected betta will have a swollen stomach, refuse to eat, and show inactivity.

You will also not see any feces at the tank’s bottom. You can relive the fish by fasting them or feeding them one frozen pea.

Ich is caused by the parasite ichthyopthirius, which naturally occurs in aquariums. The parasite will be harmful to a fish with reduced immunity. It materializes as white spots on the betta’s body.

Other symptoms include clamped fins and inactivity. The betta will try to dislodge the parasites by rubbing on decorations. Ich is addressed by treatments and raising the temperature.

These diseases occur in dirty water, and they target the fin and tail of your pet. The fin or tail tissue will disintegrate little by little, and the infection will progress to the betta’s body if left unchecked. If treated early, the tissue will regrow gradually.

Mouth fungus will typically affect a stressed fish, and your betta will be susceptible if the water quality is inappropriate or if they are getting a poor diet.

Symptoms include a cotton-like growth around the pet’s mouth as well as white spots on its fins and mouth. The fins will become frayed as the infection advances.

Treatment will involve cleaning the tank and adding copper sulfate or an antibiotic.

Your betta will be vulnerable to contracting dropsy if you feed it contaminated live food. The fish will have raised scales due to the accumulation of fluid under the scales.

The bacteria is quite contagious, and it will eventually cause kidney failure. 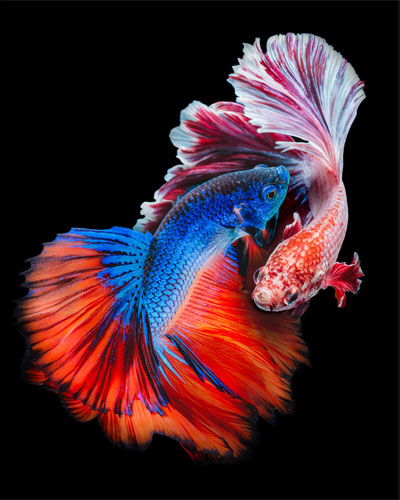 In addition to your aquarium setup, you will need a breeding tank for your betta pair. You can also invest in another tank for the fry.

Other aquarists will divide their tanks to separate the males and females.

The ideal age to breed bettas is when they are four months to one year. Source a breeding pair from a reputable breeder for the best genetics in your fry.

In the wild, female bettas pick the males they desire for mating. They look at a male’s coloration, energy levels, and the health of the fins. Once you get a suitable male, let him settle in the tank for at least two months and feed him live food to increase his carotenoid levels.

The breeding tank should be away from distractions, and it should be equipped with a filter, heater, moss, air pump, and Styrofoam cup.

The males and females will breed under optimum conditions, and the female will evaluate the bubble nest the male builds to ensure it is up to her standards. The males take care of the eggs and the fry, and you can remove them once the fry starts to swim by themselves.

Due to Some Technical Difficulties deliveries are delayed for a while. Kindly co-operate with us. Dismiss